Have you ever been asked by your Chinese friend what your zodiac is? Have you ever wondered if it is the same as the horoscopes? What is the zodiac anyways? Here’s a quick run-through about the Chinese zodiac and Western horoscope.

What is the Zodiac?
The Chinese zodiac originated from the Han Dynasty (202 B.C.–220 A.D.). It consists of 12 animals, each representing a year, with 12 years being 1 cycle. The order is fixed: rat, ox, tiger, rabbit, dragon, snake, horse, ramp, monkey, rooster, dog, and pig. (Challenge your friend to say all the animals in 1 breathe!)

So what determines the order of these animals? Based on the ancient Chinese legend, the Jade Emperor, the ruler of heavens, asked all the animals to join his birthday celebration. He decided to make it a race and said the first 12 animals that arrived would be given a place in the calendar. On the day of the race, all the animals in the kingdom participated. As sneaky as a rat is known to be, it leaped on ox’s back during the journey and arrived first. The rest of the animals arrived in the subsequent order. But where’s the cat? There are different versions of the folktale. The most widely accepted one explains that because the rat was afraid the cat was going to harm him so he told the cat the wrong date of the race. The cat woke up the next day and found out that he had missed the competition. (Gotta hand it to the rat for good strategy, you do what you gotta do right?) 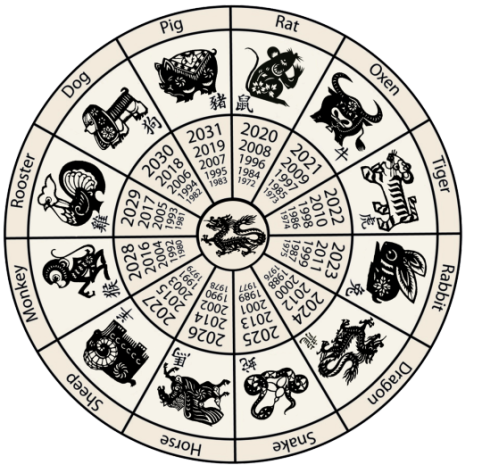 Why Do People Use Zodiac?
Using the Zodiac is a polite way to ask someone about his or her age. For example, if your zodiac is monkey, then your birth year could be 2004, 1992, 1980, or 1968 (because 2016 is the year of monkey). Similarly, a rooster zodiac means that one is born in year 2005, 1993, 1981, or 1969. I think you get the trick. So most college students this year were born in the year of the pig, rat, ox, or tiger. Try to calculate what zodiac signs your friends have. Each animal is accompanied by certain behaviors, characteristics, and destiny. For example, a monkey’s trait is sharp and smart so that person might be a fast learner or a crafty opportunist.

What is Horoscope?
The word “horoscope” is derived from the Greek words: “horo” or “hõra” meaning “time”, and “scope” or “scopos” meaning “observer”. Consider the horoscope as a map of the celestial sphere. Stars are divided into various regions and each represents a constellation. When all the bright stars in a constellation are connected, an image or shape is formed. When Earth orbits the Sun, the cycle of 1 year is called Ecliptic, which is divided into 12 equal portions. Each division is named after the closest constellation according to its angle. As a result, the corresponding signs are Aries, Taurus, Gemini, Cancer, Leo, Virgo, Libra, Scorpio, Sagittarius, Capricorn, Aquarius and Pisces. So a range of date relates to a specific horoscope. Perhaps the position of the stars in the heavens have an influence on a person. 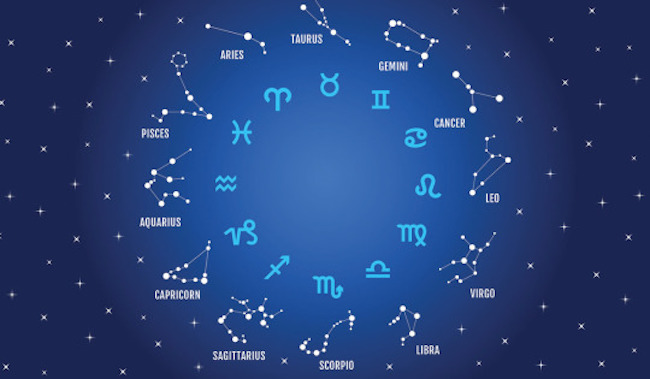 Why Do People Believe in Horoscope?
People believe that different signs of the zodiac present different characteristics and talents. For example, for people who are born between the dates of March 21 and April 19, they belong to Aries. They are hopeful, energetic, and adventurous beings. Celebrities like Jackie Chan and Mariah Carey are Aries. Some also like to find their significant other with horoscope pairing interpretations. Personal fortune-telling about love and compatibility is the most popular search among young people. I am sure that you have flipped to the end of a magazine before and searched for your weekly fortune.

Both zodiac and horoscope connect human beings to larger cosmos that may have impact on our daily life. They tell us the strengths and weaknesses of an individual and most importantly guide people to live a happy life and appreciate the uniqueness of different personalities and characters. East vs. West, which one do you like better?

If want to learn more about them, here are some fun videos to explore:

0 comments on “Decoding the Chinese Zodiac and Western Horoscope”

Tomorrow is the last day! No, not of school, but the last day to submit your cover art for Generasian’s Spring issue — Flashpoint. Last call is tomorrow, March 10th at 6:45pm. You can submit as many times as you want. See you on the cover! 📸 Link to submit in our bio.
You know sweet and sour pork, you know General Tso’s chicken, but how much do you know about their history? Read about Tiffany’s time at the MOFAD museum exhibit, Chow: Making the Chinese American Restaurant. Link in our bio 🥡
Fresh or instant food? On this episode of Generasian’s NOM, our team sampled different versions of popular Asian foods to tell them apart. Click the link in our bio to keep watching 🥟
If you want to write, make art, or if you just want to create, come join us tonight at Kimmel 8:30PM! Get to know Generasian, sip on boba, and learn how to get involved with us this Spring. See you tonight!
It’s tonight! Kimmel 803 7pm - be there or be square 😁
Our showcase might be getting a little spicy this time.... Kimmel 803 this Friday at 7PM, come to find out what it’s all about. Link in our bio 🌶