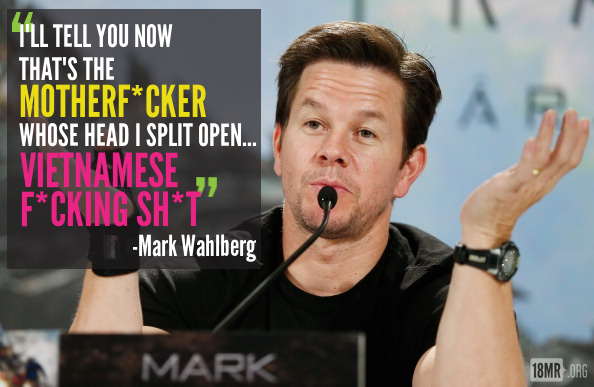 In 1988, Mark Wahlberg attacked two Asian American men in separate racially motivated hate crimes. The first, Thanh Lam, was pummeled with a 5-foot long wooden stick. According to court documents, Wahlberg screamed “Vietnam f**king sh*t!” as he beat Lam unconscious. After fleeing the scene where he assailed Lam, Wahlberg beat his second victim, Hoa Trinh, punching him in the eye and leaving him blind.

Now, over 25 years after these horrific crimes, Wahlberg is petitioning the Massachusetts State Parole Board and Governor Deval Patrick to pardon his hate crime conviction. Wahlberg claims that he is a changed man, and no longer the person he was in 1988 when he shamelessly shattered the lives of two Asian men.

But Wahlberg’s pardon isn’t an attempt to erase this part of his life and wipe the racial slate clean. It’s all about business.

In addition to being a highly-paid actor, Mark Wahlberg also owns Wahlburgers, a successful Boston-based hamburger chain that he plans to expand into California. And here’s where Wahlberg is really aiming with his request for a pardon: He wants to build his Wahlburger empire in the state of California, but will be unable to obtain a liquor license as a convicted felon. The solution? Get a pardon. Once his record is cleared of his hate crime, it’s smooth sailing – and he gets to pull in money hand over fist while his victims bear the scars and blindness he left for them.

We demand that the Massachusetts State Parole Board and Governor Patrick deny Mark Wahlberg a pardon for his hate crimes. Not only is granting a pardon an affront to justice, but even asking for one completely disrespects Wahlberg’s victims. Sign our petition now!