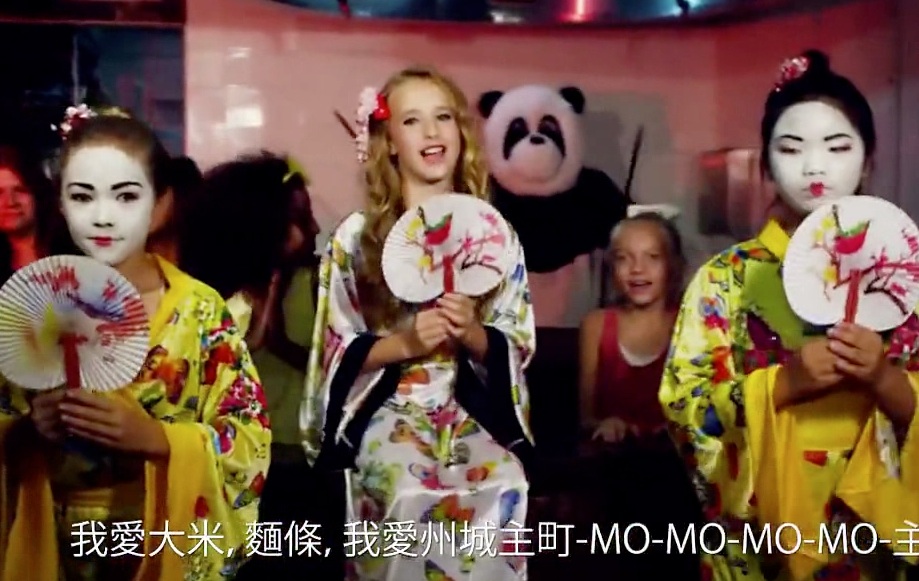 Ladies and gentlemen, the makers of ‘Friday’ are back–and this time, they’re striking at our ears and eyes with a vengeance accentuated by racist undertones.

The ‘music’ video ‘Chinese Food’ has been viral for a few weeks now, featuring a stereotypically American girl flouncing around in various outfits with a middle-aged man in a panda suit and a flock of unconvincingly peppy girls dancing to a tune with the same chord progression as Rebecca Black’s ‘hit’ single.

I’ve personally avoided watching this video for a while now, largely because I knew I’d have to post something after the fact, but I can put it off no longer–’Chinese Food’ has already passed the threshold of viral, and any views following this post will likely be inconsequential, relevant to the sheer number of views already tacked onto this racist, undeserving video.

Let’s start with the title. Although simply titling a a video ‘Chinese Food’ is not enough to make it racist, it certainly raised some red flags. For a video with a cast of probably one or two authentically Chinese people, that’s a bold statement to make: Are we really talking about Chinese food here? Where’s your expert? Is it that guy cooking with giant chopsticks at the grill, speaking nonsensical Mandarin? Because it sounded like he was talking about fresh milk and flying things, and I’m pretty sure neither is very Chinese. I’m also sure you didn’t solicit expert advice from those poor girls dressed up in geisha costumes (which by the way is Japanese, as was that floating bowl of Udon), or the magical panda that farts rainbows and tosses fortune cookies (which in China are considered American stock) at prepubescent girls. In this video, Chinese food (and thus, Chinese culture), has been reduced to deep-fried spring rolls and plates of floppy noodles and oily rice. May I point out that these are foods that are considered Americanized for the very reason that it seems–they are not Chinese. They certainly are comfort foods, which we Chinese may or may not partake of, but they are most definitely not Chinese. They have been greased up and soy-sauced into oblivion to better suit ‘the American palate’. I would like to repeat: there is literally nothing Chinese about this video.

Which brings me to the charge of racism. Did she realize she was being racist when she ‘sang’ these lines? Did the lyricist know that these were all stereotypes when he or she wrote this ‘song’? Likely not. But these lyrics are good examples of how passive racism leaches into society from the most unlikely places. Someone somewhere decided to paint with large, broad brushstrokes the idea that this fried trash is Chinese. Someone somewhere also decided that it would be appropriate to have young girls dress up as geishas (inappropriate much?), arrange a slumber party for these same school-age girls with a grown man in a panda suit, and ring a gong at the end. Needless to say, someone somewhere also decided that this video could be immune to all of the controversy and racial tension that defined this year in Asian-American relations (ie Asian Girlz). Oriental Avenue? Asian characters bowing in deference? Incompetent chopstick-wielding? Come on, just where were you this year?

You can feign ignorance, but you can’t deny that you probably felt just a little uncomfortable when the producers decided to ring that gong at the very end. And if you didn’t, then that just goes to show how comfortable we’ve become in the midst of all this casual racism. And this level of comfort is wrong. Did this video deserve 10 million views? No. But it got them anyway. All the advocacy videos for racism-awareness and change together can probably only scrap together a fraction of the views that this one has generated in a few short weeks. And that’s wrong too. So to my friends who don’t know better, this is not Chinese. Please stop painting us with your wild, hot-dog reds and littering our culture with your stale fortunes. We’re more than what we were reduced to in this song, and our culture and cuisine have more to offer than limp noodles and rapping pandas that fly through ceilings.

“They are not perfect, but we must acknowledge the fact that the two are taking major issues regarding environmental waste and femininity into their own hands while being entrepreneurial. It is definitely refreshing to see two Asian women contributing to the trend of influencer-launched brands, not to mention that their brand, @shopwomn, is one that is sustainability-conscious and female-empowering. As one of their biggest fans, I cannot wait to see how Womn. will grow and refine their definition of femininity in the future.” Learn more about @shopwomn, and the founders, @sophiachang and @weylie, at the link in our bio 👒
Some say the way to test a boba shop's quality is by tasting their regular milk tea. Join our two boba enthusiasts, Ky and Marva, as they spill the tea on 6 local chains in this blind taste test boba ranking. Link is in our bio 😋
We’re hiring! We’re looking for a new Marketing Director to join our team this coming 2020-2021 school year. More details in our bio, or at bit.ly/34Nn2B8💪🏼
We’ve got the best and the worst of @hmartofficial in our bio 😎
If you’ve moved away from home, chances are you have a comfort food. Read about what miyeokguk, seaweed soup, means to Jaehyoung at the link in our bio. 🍲
Meet Peter Do (@doxpeter), the 29-year-old Vietnamese designer spearheading the revival of minimalism with his eponymous label. Link in our bio. 🤍