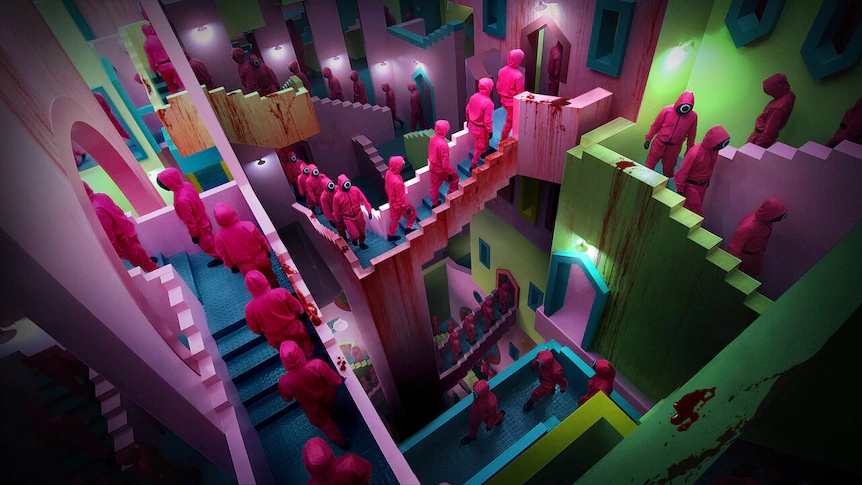 Green tracksuits. Masked pink men. Children’s games. These are all components of the latest, and one of the most popular, Korean dramas to air on Netflix: Squid Game. Set in modern-day Seoul, a series of challenges, obstacles, and internal conflicts are thrown upon a group of individuals as they fight for the chance to win a hefty sum of cash. What makes Squid Game so appealing to its audience, pulling in both avid K-drama watchers and outsiders alike, is its accessibility and social commentary on mass conformity and capitalism.

Released on Netflix on September 17th, the drama was released to provide virtually full access to anyone interested in watching, offering 37 subtitles and 34 dubs in different languages. With the wide range of languages for viewers to choose from, this makes interpretation and understanding easier. Moreover, while the subtitles are not as accurate when translated from the original Korean, it still provides enough context to get the full picture of what happens within each episode.

Another interesting factor Squid Game holds, however, is its ability to entice those who may have never been introduced to Korean or non-English entertainment. Bong Joon-ho’s Parasite was one of the first films to make headlines in the United States, most particularly for its outtake on wealth inequality within Korea. Squid Game has its own social commentary, honing in on how a corrupt economy pushes people to their extremes, inherently forcing them to commit both acts of violence and immorality.

Focusing on Seong Gi-Hun, a father struggling to make enough money to support his daughter and mom, and several other characters, all share the same goal: to win the cash prize offered to them at the beginning of the games. Initially, while no one knows what’s at stake for them and their peers, it becomes clear that it’s now a game of life or death.

Squid Game does a spectacular job at making the show engaging, starting fast-paced right from episode one, while also making the viewer sympathize with the people they meet. With all different stories to tell, each character adds another layer to the drama, making the audience further question who is good and who is bad.

Going into this drama, I had no idea what to expect. All I knew was that it was a popular show on Netflix, and it would keep me on the edge of my seat. The latter proved true as I found myself eager to finish each episode, with each cliffhanger leaving me craving for more information. So many questions popped into my head, anticipating every character’s next move and how it would affect the overall timeline.

If you liked The Hunger Games or have watched the Japanese thriller, Alice in Borderland, Squid Game is up your alley and is worth watching. The more you watch, the deeper you get connected into the enigma and mysteries surrounding the game–and people–itself.

It’s not time to let the Squid Game hype die down yet! Read our latest blog for a movie-derived social commentary and some interesting cinematic observations, or as a final push if you still haven’t watched the series!🦑⭕️⭐️☂️ Link in bio🔗
Need some music recs while you’re cozying up for thanksgiving break? We’re back with another edition of favorites! Here’s what our staff is listening to these days - what are your fave tunes? ✨🎶✅
2017 was when Japan’s Princess Mako, the eldest daughter of Crown Prince Fumihito, announced her engagement to Kei Komuro, a commoner and a graduate of Japan’s International Christian University. However, the royal family does not allow female succession - read more about how the marriage reveals much of Japan’s conservatism. Link in bio! 👍🏻🔗
Looking for a quality 2021 anime wrap or in search of upcoming works?👾 We’ve got your back! Visit our blog to check out Phoenix’s selections and let us know what your picks are! Link in bio🔗
Our first blog post of the semester is up - hear from writer Sandy Battuga on her experience learning to accept her Asian identity. Read through the link 🔗 in our bio! // graphic by @chuanming_ong
✏️What do the Generasian teams do?🎨