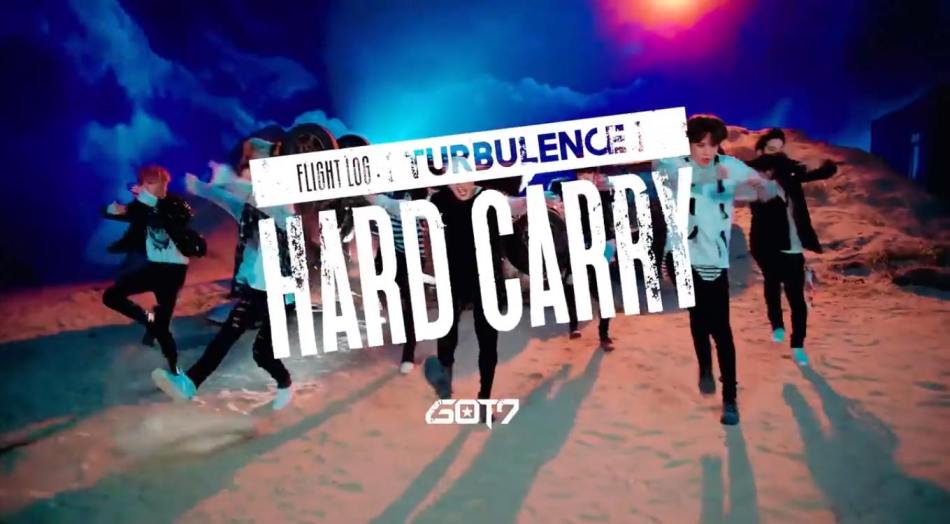 Got7 has been one of my favorite K-Pop groups since their debut in early 2014. The group is super diverse, and after binge watching several variety shows and dance practices, I couldn’t help but fall in love with them. They are talented in not only singing and dancing, but are also skilled in performance acrobatics, which sets them apart from many K-Pop boy bands these days.

Despite my love for Got7, their most recent comeback title track, “Hard Carry,” left me with mixed feelings.

The Song: In my opinion, this title track was far below “Fly”, “I Like You” and “Just Right”. I was happy to see that they incorporated a bit of EDM into their style, but I still found it too generic sounding. The song has grown on me a bit, but it is a lot more aggressive than anything they’ve released before. All the layered sounds made the song a bit messy and un-tailored. To be frank, I found this track unimpressive and not nearly as catchy as some of their other songs. People seem to either love or hate this title track, but personally, I’ll take a pass on this one.

The Dance: Although I wasn’t the biggest fan of the song, I found that the dance worked really well with it. It wasn’t anything unexpected or unique, but I can’t help but be consistently impressed with their dance skills and teamwork. The dance shows off each member’s skills, along with their impeccable synchronization. TBH I know nothing about dance, but in a purely aesthetic sense, I found it to pair with the song perfectly and was really fun to watch.

The Music Video: The music video opens with a scene of destruction – fire, wrecked cars, and dirt, which is very standard and unoriginal for a K-pop video. In this context, I’m guessing it represents the wreckage of the past love they are singing about? This is definitely the darkest music video they’ve ever released, and includes a lot of confusing imagery. For starters, what do the green and brown trees and the bird cages have to do with the song?? And why is Jackson walking through an airplane and in front of an ambulance? However, a redeeming factor of this video is how it does a really good job of splitting screen time between the members. I felt that some of their previous videos spent more time showcasing Jackson, JB, and Mark, but are now reminded that there are 7 members and not just 3.

If you would like to see more from Got7, here are some performance videos to check out: